The Draft Pick Trade Calculator was a tool a built in 2015 in order to (1) help me with pre-draft pick trades and (2) learn React.

I still think the method behind it is theoretically sound and I might dust it off again someday, although there were a few issues I'd want to sort out.

Putting a Value on Each Pick

Pretend you're in an auction league — think of how much of an advantage would it be to start with $250 when everyone else has $200. All else equal, you'd likely be the favorite heading into the season, no?

Or consider a head-to-head match up between two teams, one with a starting line up of players who go (on average) for $137, the other $97. You'd expect the team with more value would win more often, right?

AAV is a great proxy for the value of each pick for the same reason that index funds are good investments. Efficient markets. Average Auction Values are prices. They have everything we need (upside, injury risk, scarcity at position, etc) baked in.

Valuing picks this way, and making trades that increase it, is a way to effectively start off your season with a higher budget than anyone else.

This is close, but not exactly right.

Instead, we can rely on the fact that — in every individual league — SOME players will drop. We don't know who these will be ahead of time, but — as long as we commit to drafting value, whoever it is — we can plan on it and value our picks accordingly.

The question is then, on average, what AAV can we expect at each pick? To figure this out, I queried the MFL public API for results from more than 6000 auction and snake draft leagues to calculate what type of value we can expect on average at each pick.

Here are the results: 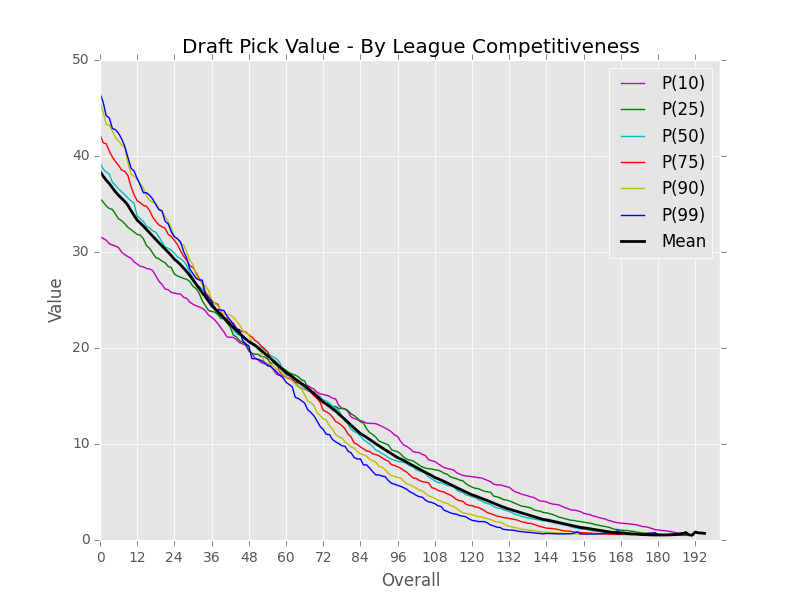 Note the different colored curves denote percentiles. The light blue line (P50) indicates the midpoint best-player AAV (normalized to a full 12 team, $200 budget league) you can expect available at any given pick. We can interpret these lines as varying levels of league competitiveness. For example, assuming every pick is very near (99 percentile) the best player available gives us a value chart equal to the dark blue line above.

One thing this chart makes clear is the expected value of a draft pick is based on how competitive your league is. Early picks are worth relatively more in competitive leagues.

This is intuitive: the tougher a league, the quicker good players go off the board, making later picks worth less than they’d be if no one knew what they were doing and bargains were prevalent.

I thought it was a reasonable assumption that that leagues where draft pick trading is prevalent are generally more competitive, so the calculator assigned picks based on the 90% percentile.

Following this calculator helps increase the auction value of your entire roster. I've noticed the calculator tends to be more in favor of trading down that most fantasy players, and I think this is why.

Having a valuable whole roster is a good thing overall, but it's possible it might lower your probability of winning — especially early in the season — by effectively recommending you swap high caliber starters for depth. Whether this helps you in the long depends on how you can turn that depth into starting lineup power.

In leagues without a lot of trading, it might be more appropriate to judge the impact in terms of auction amounts on your starting lineup. If I dust this off I might add in that feature.

This was my first project in React. I think I also used Redux. If I were to revive it today I'd use Elm.